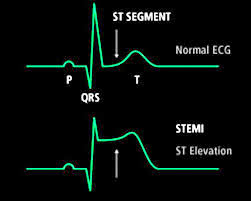 Acute myocardial infarction is the destruction of tissue due to inadequate blood supply so that coronary blood flow is reduced. (Brunner & Suddath, 2002)

Acute myocardial infarction is the death of myocardial tissue caused by myocardial coronary blood damage, due to the inadequate blood flow. (Carpenito, 2000)

Acute myocardial infarction is ischemia or necrosis of the heart muscle caused by decreased blood flow through one or more coronary arteries. (Doengos, 2000)


b. Predisposing factors
1 Biological factors that can not be changed:
a. Age over 40 years.
b. Gender. The incidence is higher in men, whereas in women increases after menopause.
c. Heredity.
d. Race.

Acute myocardial infarction usually occurs in men over 40 years and having artheriosklerosis. In the coronary vessels and is often accompanied by arterial hypertension. The attack also occurs in women and young men, early 30s or even 20s. Women who use the contraceptive pill and smoke have a very high risk. However, the overall incidence of myocardial infarction in men is higher than women at all ages.

Chest pain that lasted all of a sudden and continuous, located at the bottom of the sternum and upper abdomen is the main symptom that usually appears. Pain will be felt increasingly heavy can spread to the shoulder and arm, usually the left arm. Unlike the pain of angina pain arises spontaneously (not after heavy work or emotional disorders) and persist for several hours to several days and will not go away with rest or nitroglycerin. In some cases the pain may spread to the chin and neck, pain is often accompanied by shortness of breath, pallor, cold sweats, dizziness, light-headedness, nausea, vomiting (Brunner & Suddarth, 2002)

AMI with ST elevation (STEMI) usually occurs when coronary blood flow decreased abruptly after occlusion of thrombus on atherosclerotic plaque that already exists. STEMI occurs when a coronary artery thrombus occurs rapidly at the site of vascular injury, where the injury is triggered by factors such as smoking, hypertension, and lipid accumulation. In STEMI classical pathological picture consists of rich red fibrin thrombus, which is believed to be the basis of so STEMI respond to thrombolytic therapy. Furthermore, the location of plaque rupture, various agonists (collagen, ADP, epinephrine, serotonin) triggers platelet activity, which in turn will produce and release thromboxane A2 (potent vasoconstrictor local). In addition, platelet activation triggers a conformational change in the receptor glycoprotein IIb / IIIa. After experiencing a conversion function, the receptor has a high affinity for the amino acid sequence in soluble adhesion proteins (integrins) such as von Willebrand factor (vWF) and fibrinogen, both of which are multivalent molecules that can bind to two different platelets simultaneously, resulting in crosslinking of platelets and aggregation.

Coagulation cascade is activated by exposure of tissue factor on endothelial cells are damaged. Factor VII and X are activated, resulting in the conversion of prothrombin into thrombin, which then converts fibrinogen into fibrin. The coronary arteries are involved then will experience the occlusion by thrombus composed of platelets and fibrin aggregates. On rare occasions, STEMI may also be caused by occlusion of the coronary arteries caused by coronary embolism, congenital abnormalities, coronary spasm and systemic inflammatory diseases.

1. Monitor cardiac rhythm and frequency.
R /: Tachycardia and cardiac dysrhythmias may occur when attempting to increase cardiac output responds to fever. Hypoxia and acidosis due to ischemia.

4 Provide comfort measures such as changes in position and back rub, and entertainment activity in cardiac tolerance.
R /: Improve relaxation and redirect the attention.

5. Encourage use of stress management techniques such as breathing exercises and guided imagery.
R /: This behavior can control anxiety, increase relaxation and decrease the work of the heart.

1 Give oxygen complement.
R /: Increase the availability of oxygen to myocardial function and decrease the effects of anaerobic metabolism, which occurs as a result of hypoxia and acidosis.

2 Give drugs in accordance with indications such as digitalis, diuretics.
R /: Can be given to increase myocardial contractility and decrease the workload of the heart in the presence of CHF (miocarditis).

4 Assist in emergency pericardiocentesis.
R /: The procedure was done in a bed can to lower the pressure in the fluid around the heart.

5. Prepare patients for surgery if indicated.
R /: Replacement valves may be required to improve cardiac output.
« Prev Post
Next Post »